I have recently completed processing the diary of James Oliver Longstreet, a Wesleyan alumnus from the class of 1857. The diary is a colorful historical document, providing a rare glimpse into the daily life of a Methodist college student in the middle of the 19th century. It provides insight into the political and social activities of Longstreet’s generation. As a contemporary Wesleyan student, I have found myself fascinated by Longstreet’s description of a Wesleyan that is at once familiar and alien to me. 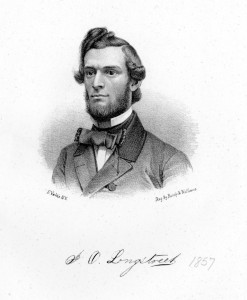 Wesleyan is well known for the social and political activism of its students, and so I was pleasantly surprised that Longstreet’s classmates were likewise engaged in political activism. The journal records his interest in abolitionism, as well as his role in the local Republican political club. Longstreet worked for the election of the first Republican presidential candidate, John C. Fremont. He describes a “grand Democratic splurge” (campaign event) on July 17, 1856. He and the other Fremont supporters heckled the Democrats during their meeting and “cheered after meeting adjourned.” He describes how “some Democrats, headed by Putnam, made [Brother] Fox run for his life. He hid in Mc. Donough.”

Longstreet’s political engagement came in part from his commitment to abolitionism. Throughout the diary, he remarks on his enjoyment of the writings of Frederick Douglass. Other evidence of Longstreet and his friends’ political engagement abounds. For example, when he went for dinner at his friend Mr. Blake’s house on November 5, he reported that, “They are very much excited about the election. They think old Buck (Buchanan) will make slaves of us all.”

But college for James Longstreet was not only about politics. He was also a member of the Mystical Seven, and his diary provides a great deal of insight into the nature of fraternities and secret societies at Wesleyan. In particular, Longstreet was closely involved in the founding of the Middletown chapter of Alpha Delta Phi. On July 23, Longstreet’s friend Powers (probably Orville Watson Powers, class of 1856) contacted him because his society, known as the Lebanians, wanted to “become a chapter of ΑΔΦ and he wants me to recommend his society to Head.” On August 1, Longstreet writes, “This morn have learned that the Betrians and [Powers’ group] have united and come out ΑΔΦ!!!” The diary also provides an account of what is possibly the first recorded instance of a student being rejected by the organization, writing that, “Carr was rejected by ΑΔΦ and feels dreadfully.”

The diary is full of interesting threads, and James O. Longstreet’s involvement in political activity and in fraternal organizations makes it of interest to many current Wesleyan students and alumni. I have greatly enjoyed the walk back in time that Mr. Longstreet has afforded me!