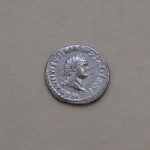 The first of these coins, a silver denarius minted in 80 CE by Emperor Titus, is connected to the early history of printing.  According to the Renaissance humanist Erasumus, an exemplar of this coin was given to the famous Venetian printer Aldus Manutius by his friend Pietro Bembo.  The front of the coin shows the usual profile of the emperor. 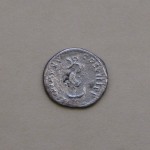 The back of the coin, however, shows a dolphin entwined around an anchor.  (It’s a little worn away on our copy of the coin, but the dolphin around the anchor is still there, trust me!)  According to Erasmus, this image represented the Latin adage “Festina Lente,” or “Make haste slowly.”  Aldus Manutius was so inspired by this adage that he took the image of the dolphin and the anchor as his own printer’s device. 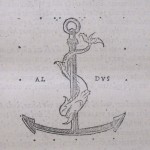 The image seen here is from the verso of the final page of a book published by him in 1502.

The other coin in Special Collections & Archives, donated by Rabbi David Leipziger Teva, is known as a “Judaea Capta” coin.  In 70 CE, the city of Jerusalem was sacked by the Roman emperor Vespasian and his son Titus. 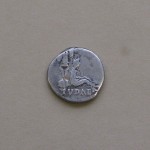 For years afterward, Judaea Capta coins were minted to commemorate the Roman victory.  The back of this coin shows a mourning Jewish woman seated under a palm tree.  You can read more about this particular coin and its place in history in a Wesleyan Connection article from January of 2010.