To our student workers, without whom the library could not function:

You never know how much of an impact you may make on us!  Special Collections & Archives recently received a gift of a 1577 English legal book, 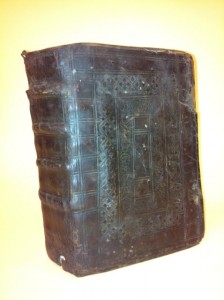 presented to Wesleyan University “in honor of Kent Olson, Wesleyan Class of 1977, whose intelligence, energy and creativity, enhanced by his wit and humor, made him a most outstanding library student worker.  The value of student workers to Olin library service cannot be overestimated.” What a dedication!

Working in the library made an impact on Kent Olson too, as he went on to become a librarian himself, and is now the Head of Reference, Research and Instruction at the Arthur J. Morris Law Library at the University of Virginia.  The anonymous donor followed his career, and aptly chose a rare book on English law of the 16th century to honor the student who became a law librarian.

The book in question is 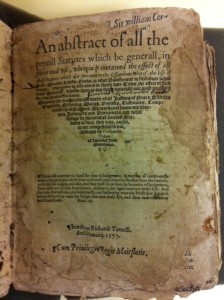 Ferdinando Pulton’s An abstract of all the penall statutes which be generall in force and vse: wherein is contayned the effect of those statutes which doe threaten to the offendours therof the losse of life, member, lands, goods or other punishment or forfeiture whatsoeuer: whereunto is also added in theire apte titles, the effect of such other statutes wherin there is any thing materiall and most necessary for eche subiect to know. Moreouer the aucthoritie and duetie of all justices of peace, shirifes, coroners, eschetors, maiors, baylifes, customers, comptroulers of custome, stewardes of leetes and liberties, aulnegers and purueiours and what things by the letter of seuerall statutes in force may, ought, or are compellable to doe.  By Fardinando Pulton of Lincolne Inne, Gentelman.  The book was published by Richard Tottel, in London, in 1577.

What a title!  And with 16th-century spelling, to boot. 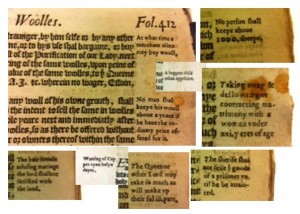 The contents, arranged alphabetically in sections like an encyclopedia, discuss all manner of topics, including the obvious things like murder, bail, fines, and felonies, but also many tradespeople of the time, such as weavers, mariners, butchers, soldiers, shoemakers, sheep herders, and many more.  Small marginal phrases help the reader find the right section.  There are even sections on swans, hats and caps, women, the crown of the queen, coverlets, fasting days, partridges, monasteries, poor people, armor, counterfeit letters…

The physical book itself is fascinating too.  Its binding, contemporary with the text inside, has a rolled tooled design on the leather of the cover. 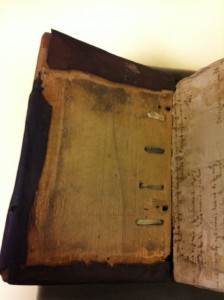 On the inside of the cover, you can see the wooden boards over which the leather is stretched, and the leather thongs used to connect the text block to the boards.  As was common practice in bookbinding at the time, scrap paper with manuscript writing on it was used for the fly-leaves (those pages in the front before the title page, and in the back after the text has ended).  The binding originally had two clasps to hold the book closed.  Only one half of one of the clasps is still left, though. 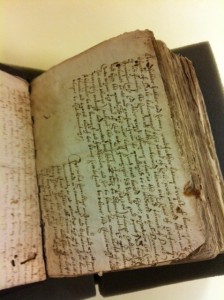 The gift of this book to Special Collections & Archives in honor of Kent Olson’s time at Olin as one of our student workers goes to show how important you all can be to us!  Thank you!

Note:  The same edition of the work is available online in a digitized format, through the library’s subscription to EEBO: Early English Books Online. (See this library record for access to the e-version.)  But looking at a digitized image is nothing like looking at the real thing!