It’s been just over a year since the Occupy Wall Street protest movement began.  In honor of the anniversary of the movement’s beginning (on September 17, 2011), here are some images from a new addition to our collection, just cataloged this week: an artist’s book consisting of 24 plastic cards, made to look like credit cards, but each with a different photo taken at one of the Occupy Wall Street demonstrations. 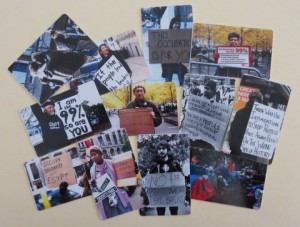 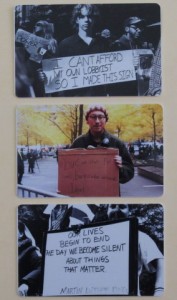 The back of the cards are where you really notice that they look like credit cards: 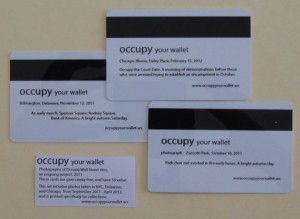 According to the website for the project (www.occupyyourwallet.ws), “Occupy your wallet is an ongoing project by a Delaware based artist [Emily Artinian], in which photographs of demonstrators, often including placard messages, are printed on valueless credit cards, which are given away for free — sometimes to other Occupy protestors, sometimes to friends and acquaintances, and sometimes at exhibitions and open studio visits.  The work — being free, and intended to be kept in an untraditional space for art (one’s wallet) — explores parallels between the Occupy movement and alternative press traditions of subverting, appropriating and re-claiming centers of power — be they galleries or governments.”

Finally, here are a couple close-up: 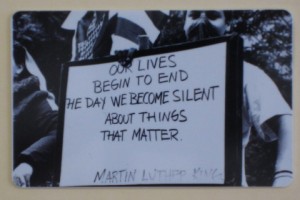 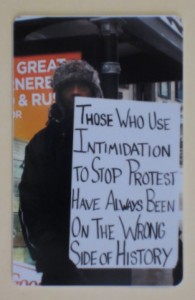