Here’s a newly-cataloged book in our collection: 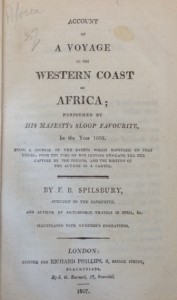 Account of a voyage to the western coast of Africa, performed by His Majesty’s sloop Favourite, in the 1805, being a journal of the events which happened to that vessel… By F. B. Spilsbury (London: R. Phillips, 1807).  Several of the engravings in the book show that the seafaring life was full of danger, and not always from the sea itself!  There has been a long-standing practice of initiation rites for new sailors when they cross the equator for the first time.  This ceremony, called “Crossing the Line” was common in navies from all over the world, and ranged from fun-loving celebrations with costumes and role-playing, to much more dangerous abuses of the new sailors bordering on hazing, and sometimes even leading to death.  For more on the history of  “Crossing the Line,” take a look at the Wikipedia article on the ceremony.  In this engraving, the seasoned sailors forcibly shave the uninitiated newbie, and he doesn’t look all that pleased with the treatment he’s getting! 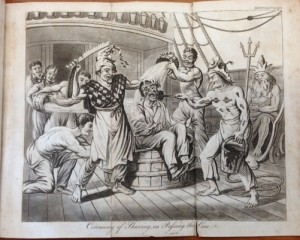