In the archives, there is a fascinating collection of examinations from 1868 to 1970. While going through this collection, I had to do some research on the curriculum during that time to see how these exams fit into the history of the development of academics at Wesleyan. In the mid- to late- 19th century, the curriculum was very different from what we know it as today. The curriculum we know today wasn’t set until after World War II with few changes since then, with the exception of the addition of a few departments. The curriculum at the beginning of the collection, however, was made up of only two options: the general course of study and the scientific course of study. There were four required entrance exams for Wesleyan: Latin, Greek, English, and Mathematics, although if you were planning on pursuing the science, you were not required to take the Latin and Greek entrance exams. However, Greek and Roman history were still part of your required classes, as well as other languages. The exams, especially the language exams (Latin, Greek, and German particularly) had pretty demanding expectations, even of the entrance exams. There was often a long paragraph that just said “translate,” and this was just to be allowed to continue studying that language! Every student had their schedule planned out for them all four years based on what they were studying and what year they were, with, initially, no choice in electives. It wasn’t until the beginning of the 20th century that departments were established and students were allowed to choose among them and various classes within them. Since then, the exams don’t look too different than what most are today. The exams in the collection from post-World War II are mostly mid-term and final exams and therefore comprehensive exams for courses. It is interesting to see what department’s material has changed over the years and which have not changed at all. 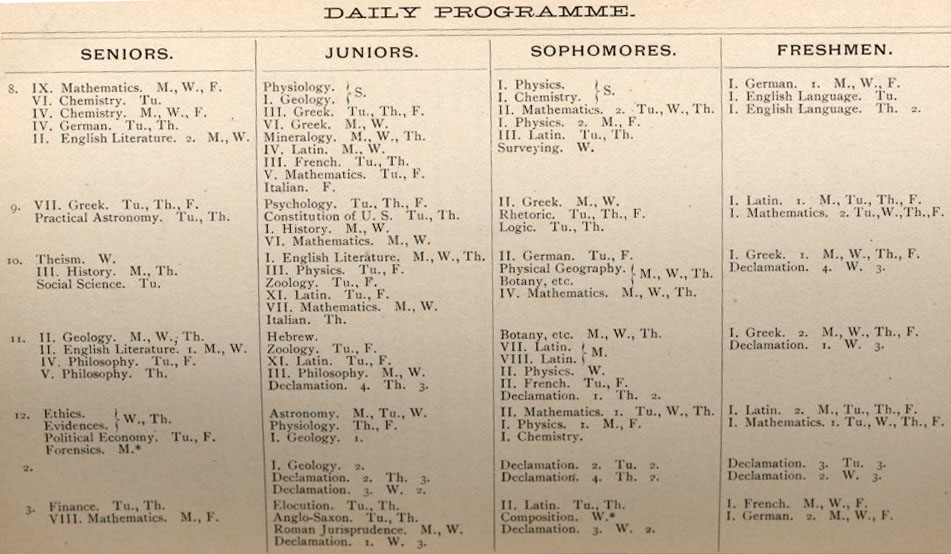 (This is an image of the course schedule by class year from the 1890-1891 course catalogue. Click image to enlarge.)

The course catalogues themselves are pretty interesting as well, although they are not part of the examinations collection. They were pretty elaborate when the student body was much smaller, with a list of every student by class, where they were from, and where they lived on campus, and a list of all the professors and their addresses too. There was also a list of the graduates of the spring before and the degrees they had earned. There were campus maps, some years more detailed than others. Like the current course catalogues, there was a brief history of Wesleyan, a short explanation of all the academic prizes, a list of the members of the board of trustees, a list of building on campus and their purpose, available scholarships, and rules and regulations.

If you want to see specific exams to see if what your’re learning has changed at all over the past 150 years, come check out the Examinations Collection, made up of over 800 exams!