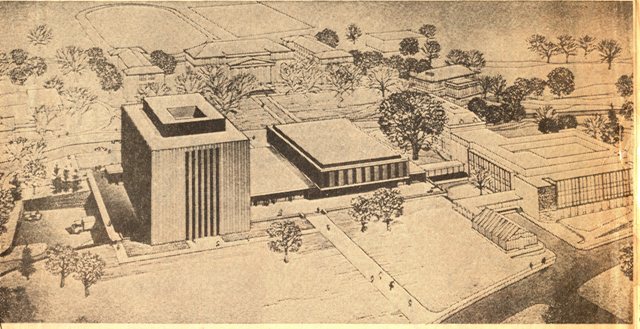 This is a collection containing documents from the planning and construction of what is now Exley Science Center, between 1963 and 1971. This collection is about Phase II of the Science Center. Phase I was the construction of Hall-Atwater Laboratory, which was completed in 1967, preceding the rest of the center. In the mid 1960s, the student population of the University was augmented by 510, approaching the population we have today. Wesleyan had to meet the need to accommodate more students than the previous Hall Laboratory was capable of, a well as meet competitive standards in the fields of science. These two factors justified the cost of the new Science Center, which in the end was approximately 18 million dollars. Phase II was completed in 1970.

This collection is of particular interest to students and faculty at the present moment due to the pending construction of the new Molecular and Life Sciences building. This enormous project that the University is about to undertake has become controversial for a number of reasons, but perhaps the most talked about controversy is the demolition of the historic Shanklin Laboratory. Hall-Atwater, which has only been around since 1967, will also be demolished, although this seems to have not raised much protest. The February 22 issue of the Argus described the complaints issued by the “Shanklinistas:” the faculty of Shanklin who have protested its demolition, and have been supported by many students. Despite this, in the same Argus article, Professor of Neuroscience and Behavior Stephen Devoto was quoted as saying “It’s going to be the most expensive thing Wesleyan has done, perhaps ever. The next step is to get the campus behind this plan, and agree that this is the best way forward.” Indeed, the project will cost an estimated $160 million dollars, which is expected to significantly contribute to a projected $2 million dollar annual deficit by the 2012-2013 school year (according to the Argus, April 4). Devoto contrasts the new building from the existing Science Center, which he calls the “ugliest thing on campus” (Argus, Oct 5).

It will be interesting to see if the building is perceived as aesthetically pleasing, or if it ends up being a functional project that ignores questions of aesthetics (as many perceive Exley). According to the Campus Master plan, the goal is to “create a stronger sense of community among students and faculty in different areas of science by increased opportunities for informal interaction, to address how classrooms and modes of teaching may change as we enter an era in which technology will become more important in the acquisition and transmittal of knowledge.” You can also access the images of what the building should look like here. It should provide an interesting comparison with the original construction of the Science Center.