Cataloging photographs can be frustrating. I’ve been working on the Middletown Press Project and one of my jobs is to sort the photographs that we received. Many of the photographs are impossible to date and the people and places impossible to name. The unidentifiable photographs are placed into one large box that sits on the corner of the desk. This pile of nameless people and dateless scenes makes me incredibly uncomfortable. Perhaps I am a little bit obsessive, but I dislike not being able to learn more about each photograph. Of course, I generally have no choice but to ignore this anxiety because there are too many photographs and too little time. 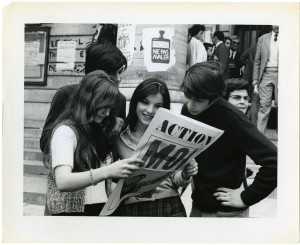 Once, however, I got lucky, and I was able to fulfill my obsessive compulsions. When I came across the above photograph, there was no information about it, but the prominently pictured newspaper convinced me that I could save this photograph from the “Unidentified” box. Two or three Google searches later, I found a French website that sold old copies of newspapers and had pictures and descriptions of each edition. I was able to find the same edition of the newspaper featured in this photograph for sale on this website and can now relatively safely guess that the photograph was taken in Paris, June 1968. What had been a photograph of four people looking at a newspaper became a photograph of the reactions to and aftermath of the student riots of May 1968.

My experience of this photograph helps to counterbalance my other frustrations, although such an experience is rare. It may have been a better use of my time to organize the labeled photographs, but I can’t help but to enjoy a discovery, even one as small as this.