In early October 1931, Wesleyan University celebrated its centennial. The event was highly publicized, and was attended by the university’s student body of approximately 600 as well as by guests, alumni and parents. My most recent archival project has been to explore documents associated with the centennial celebration, the Wesleyan Centennial Collection. Contained in a large scrapbook and also in several folders, the documents tell the story of a young university already proud of its place in the world of American higher education.

The event itself was elaborate, consisting of several days of banquets, concerts, a comic opera performance entitled “The Girl and the Graduate,” and a culminating academic procession on Andrus field. Items preserved in the scrapbook and collection include playbills, menus, schedules, memorabilia, and more. Badges and ribbons for guests and workers at the event have also been preserved. Guests of the university included Prime Minister Bennett of Canada, a conservative politician and well-known Wesleyan Methodist, who gave a speech at the ceremonies. 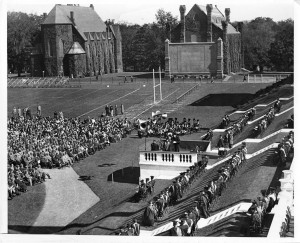 Wesleyan’s campus publications covered the events extensively, and the collection includes articles from the Argus, Olla Podrida and the Wesleyan University Alumnus. Regional newspapers including the Hartford Courant and the Hartford Times also covered the event, with the Courant giving its entire front page to articles about Wesleyan on September 27, 1931.

Some of the events of the centennial are of interest, including the Wesleyan football team’s 0-37 loss to Columbia University before the centennial crowd of hundreds. It is clear from the documents how much has changed at Wesleyan since 1931. For example, the university served no alcohol at any of its events, instead offering ginger ale. Other documents attest to the continuing role of the Methodist church at Wesleyan, including a letter from several faculty to a Methodist bishop extolling the virtue and abstinence of the student body. While much has changed, it is also clear that Wesleyan at 100 was a proud place coping well with the massive changes occurring around it. Remembering how Wesleyan celebrated its 100th year may help us to understand what Wesleyan meant to students, alumni and the world at large then and help us reflect on what it has come to mean for us now.