The other day, I discovered a mystery in Special Collections: an extremely skimpy catalog record for a book in our collection.  All it said about this book was:

What does all that mean? Essentially, because the book had been missing its title page for a very long time, we had no idea where or when it was published, by whom, or even what its real title was!  It was time to do some detective work… 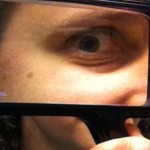 I started with what we did know about the book.  The title probably would contain the words “Nouveau Testament,” since that was what most French New Testament Bibles were titled.  I knew it was 665 p. in length.  And I knew that it had been published in or before 1762, since one of the book’s former owners had signed and dated the book in that year.

My first tactic was to look in WorldCat for every “Nouveau Testament” published between 1700 and 1762, looking at each record to see if the pagination matched.  But there were hundreds of French New Testament Bibles printed in that time period!  It was like the proverbial search for a needle in a haystack.

On a whim, I typed the phrase  “Nouveau Testament” and “665” (the pagination of our mystery Bible) into Google, to see what it would find.

The first hit was from Google Books – an excerpt from a 1994 scholarly bibliography of seventeenth-century French Bibles, by Bettye Thomas Chambers.*  And one of the Bible entries in her bibliography was exactly 665 pages long.  Like so many scholarly bibliographies, this one was extremely detailed.  I compared each detail about this particular Bible to the one I had in hand:

The signature statement (all those letter-number combinations that printers used to know what order to put the pages in) matched.

The caption and first sentence of the preface matched, and was on the correct pages.

The caption and first sentence of the “Argument sur les quatres [sic] Evangiles” matched, and it too was on the correct pages.

Even where the blank pages fell matched Bettye Thomas Chambers’s detailed description.  The mystery was solved!

We now know that our mystery “Nouveau Testament” is in fact Le Nouveau Testament, c’est à dire, la Nouvelle Alliance de Nostre Seigneur Iesus-Christ, published in Montauban for Pierre Braconnier, in 1685.  And to make matters even more interesting, according to the Chambers bibliography, this particular publication was “the last Protestant N[ew] T[estament] published in France in the Ancien Regime; the revocation of the Edict of Nantes took effect 18 October 1685.”  Our mystery Bible is also historically significant.

Is there a moral to the story?  Well, maybe not a moral, but an interesting observation… This mystery could not have been solved without both new technology and old-fashioned scholarship.  Without the phenomenal capabilities of Google Books, searching the full text of unfathomable numbers of scanned books, I never would have found this particular reference to a “Nouveau Testament” 665 pages in length.  But if Bettye Thomas Chambers had not put in years of painstaking research and attention to detail and published her bibliography, Google Books would not have had anything to find.  When people argue between new-fangled technology and old-fashioned scholarship, I say we need both.