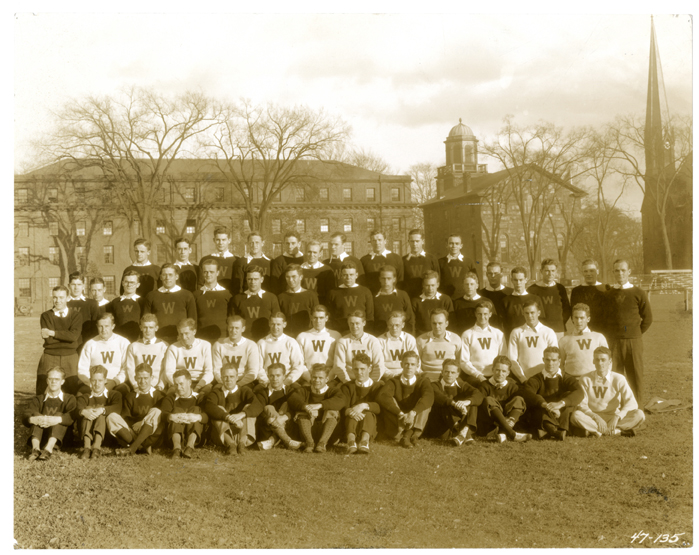 This photograph taken in 1930 of the Varsity Club is our pick of the week. It comes from one of our student assistants, Abbey Francis. She writes:

The Quest For The Mystery Sweater

Last week, I received an unusual research request from Leith Johnson, the University Archivist here at Special Collections & Archives. I was to track down a sweater.

Forgetful as I am, this could be a story about tracking down my own lost cardigan (if you have, in fact, seen an old black button-front sweater from The Gap, I would really appreciate getting it back). Alas, this request involved a different garment, and an altogether more interesting one.

Leith had received a request from the son of a Wesleyan alumnus who was in the class of 1927. He owned his father’s old Wesleyan sweater, and was curious to know if it was connected to some club or sport that his dad might have been in while at Wesleyan. He sent along pictures of his father’s old woolen pullover. Looking at the photos, I could see that it appeared to be faded black. The lower torso, as well as the sleeves, were tightly ribbed, and would have been snugly fitted to the wearer. The neckline of the sweater was unusually wide in comparison to modern menswear. Most notably, perhaps, was the still-bright, sans-serif letter “W” stitched onto the chest. 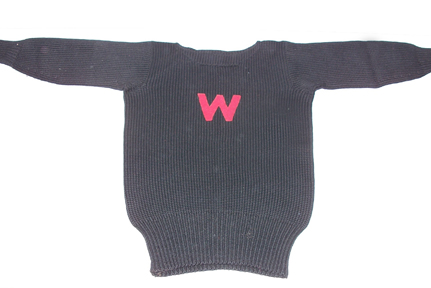 The challenge would be to find this sweater’s twin in the myriad documents and pictures that Special Collections holds from the 1920s-1930s era.

I started by looking through the 1927 Olla Podrida, a now-defunct Wesleyan yearbook that chronicles the achievements and activities of the student body and faculty. The name of the mysterious sweater owner was Henry Calvin Kuhl, and I found his biography and list of campus activities in the Podrida’s senior section. Kuhl was involved in an almost absurd number of activities, and I was forced to ask, when did this poor boy ever go to school?

Nevertheless, I copied down the list of activities in which he was involved, which ranged from the varsity swimming squad to the leader of the glee club. I then used this list to search through the vertical files housed in Special Collections. The vertical files, for the uninitiated, are a series of filing cabinets that contain records relating to a wide variety of subjects and include files relating to activities all over campus, from sports to identity groups to theater clubs. First, I checked the Glee Club vertical files. I didn’t find a picture of the sweater, but I did discover that Kuhl, in his tenure as Glee Club leader, led the team to victory in the intercollegiate championships.

The vertical file photos of the swim team, tennis team, and track team also yielded no luck, but I finally struck gold in the soccer team vertical files.

A team photo from 1932 showed a group of soccer players, almost all in black sweaters with similar necklines to the one now in the younger Mr. Kuhl’s possession. A few strapping young men wore sweaters with the distinctive letter “W” emblazoned on their chests. Score. Or should I say, goal?

It seemed likely that, though Kuhl had graduated in 1927, the design for the men’s soccer sweaters had stayed the same for several years running. It looked like I had found the origin of the vintage sweater now belonging to the younger Kuhl.

The photo was grainy, as it was a photocopy of an original print that’s stored deep inside the Special Collections stacks. This meant that my next task was to hunt down that original copy, and see if I could get a clearer image of the sweater to compare to Mr. Kuhl’s.

So, into the stacks I went. I was looking for the corresponding archival box for the folder of photocopied photos that I’d already found in the Vertical Files. Finally, I saw it—Athletics, soccer—check!

I removed the folder from the box, and searched through it until I found the original still of the 1932 Wesleyan soccer team. The paper was still glossy, the image as crisp as I could have hoped for and… the “W” on the sweater had serifs. They were clearly visible in the original. It was not the same piece of clothing. 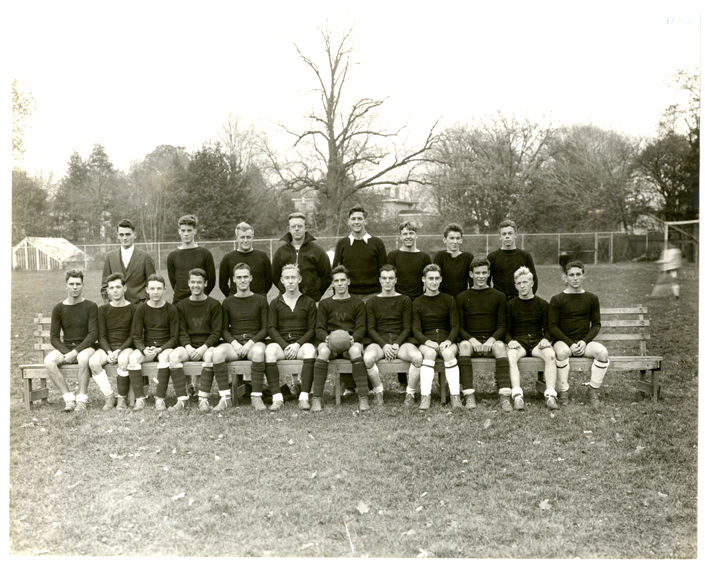 The origin of Kuhl’s sweater still eluded me.

This time, I went straight to the stacks to search for clues. Leith had suggested that I look for pictures of crowds at sporting events—perhaps the sweater was what members of the Glee Club had worn at football games.

So I pulled “Athletics-General — Athletics-Football-Players III” from the stacks and started combing through it for pictures of games.

And there it was—in a photo of the 1930 football team; several boys wore black sweaters with smallish, red, sans-serif “W”s on the chest. Sweaters just like Mr. Kuhl’s. Touchdown! 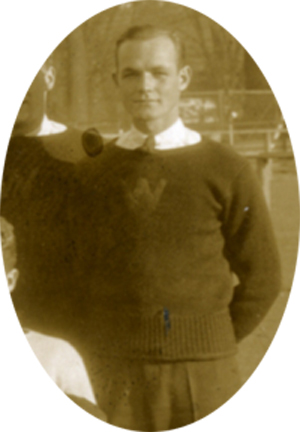 Searching through the 1930 Olla Podrida, I discovered several more Wesleyan men wearing the same sweater that Kuhl owned, including a captain of the hockey team in 1930. As the captain of that year was a senior, he would have been a freshman during Kuhl’s last year at Wesleyan. It seemed logical, therefore, that their years of Wesleyan sweater-purchasing had overlapped, resulting in ownership of the same model of garment. 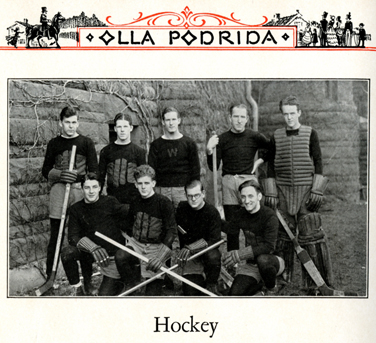 From this information, I made an educated guess. Most of the sports teams, including those that had photos featuring the sweater in question, sported a variety of different sweater designs. What was most likely, therefore, was that the Wesleyan athletics department, or possibly the University generally, just ordered a variety of generic Wesleyan gear that could be worn over more specific athletic uniforms.

I presented my theory and the photos to Leith, who agreed that this was likely the case and told me that he’d scan the photos so one could be the pick of the week.

Of course, the story does not quite end there. When he scanned the photos, Leith noticed that the back of the photo of the football team was labeled with the words “Varsity Club – 1930.” With my infinitesimal knowledge of sports, I had assumed that this just meant the Varsity football team. Leith knew better, however, and found out that the Varsity Club was a collection of the varsity athletes from many teams. This accounted for the variety in sweaters. It also means that sometime in the past, this photo had been misfiled into the football folder. It was really only by this stroke of luck that we found the picture at all, but it provided the key to identifying the sweater.

Leith also discovered a 1911 edition of the Wesleyan Handbook of Athletics which describes not only how varsity sweaters should be styled (e.g.,  a plain red “W” on black for football players but an Old English “W” on white for tennis players) but who is eligible to wear them. The handbook states that the managers of various teams are allowed to wear the “W.” Kuhl was manager of soccer as well as a member of the varsity swimming squad, and though those two sports did not exist at Wesleyan in 1911, and were therefore not mentioned in the Handbook, it seems likely that they were under a similar set of rules regarding insignia in Kuhl’s time.

Leith went back to the Olla Podrida and looked for Kuhl’s name in relation to his position on the soccer team. And here we were—goal again. 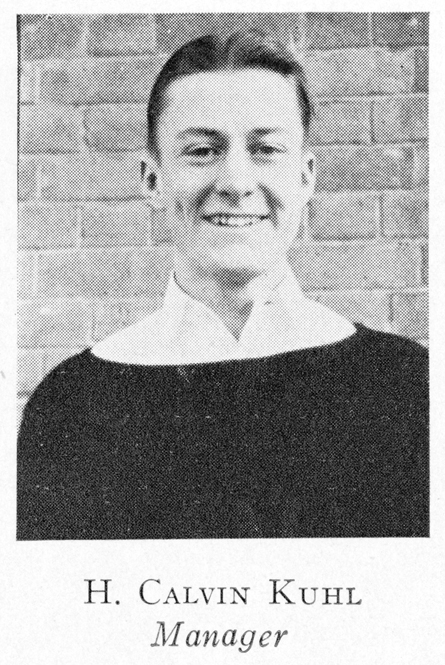 In Kuhl’s portrait on the soccer page, just barely visible at the bottom of the frame, was an obscure, sans-serif “W.” The sweater was black, the letter was slightly lighter, and the neckline was unusually wide. As unlikely as it was, we had found a picture of Kuhl, in his role as soccer manager, in what is almost certainly the sweater his son now possessed.

2 thoughts on “Pick of the week, Oct. 12: The Quest for the Mystery Sweater”