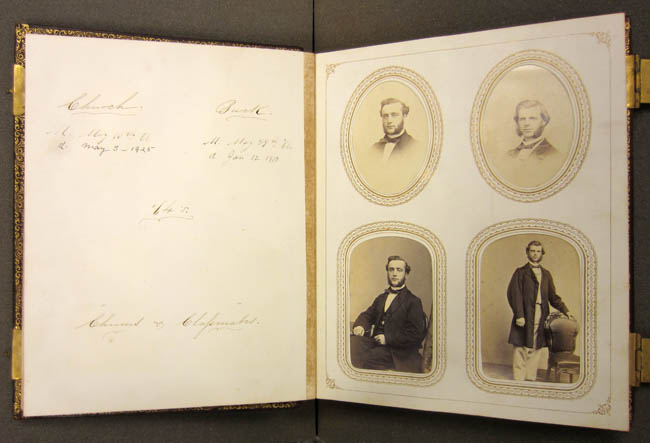 A reader was interested in class albums, including this one that belonged to Charles Washburn Church, Class of 1864. In the 19th century, before there were college yearbooks, Wesleyan students assembled albums and selected the photographs they wished to include. At first, the albums consisted of portraits, but in the 1870s and 1880s, photographs of Wesleyan and Middletown scenes could be chosen. (We previously blogged about class albums here.) Church is pictured in the two photos top and bottom left and his chum, Charles Henry Buck, also Class of 1864, is pictured in the two photos top and bottom right. Buck would later serve as a Wesleyan University trustee.

Apparently, Church was a man of many interests. He was a member of Alpha Delta Phi and Phi Beta Kappa. He earned his Masters degree from Wesleyan in 1867, and was successively a minister, farmer and surveyor, editor and newspaper publisher, census office clerk, book and insurance agent, and author.