Here’s one of our newly-cataloged artists’ books:

Siegfried Sasson is best known as a poet of World War I, along with Robert Graves and Wilfred Owens.  He wrote this short poem called “Everyone Sings” in celebration of the end of the war, but just before he learned that his friend, Wilfred Owens, had died.

Everyone suddenly burst out singing;
And I was filled with such delight
As prisoned birds must find in freedom
Winging wildly across the white
Orchards and dark-green fields; on–on–and out of sight.

Everyone’s voice was suddenly lifted;
And beauty came like the setting sun:
My heart was shaken with tears; and horror
Drifted away … O, but Everyone
Was a bird; and the song was wordless; the singing will never be done.

In 2009, the artist Terry Schupbach-Gordon carved six woodcuts to accompany the poem, and created an artist’s book with the poem and his woodcut prints.  Here are a few images from inside… 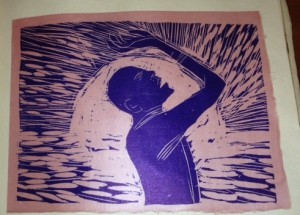 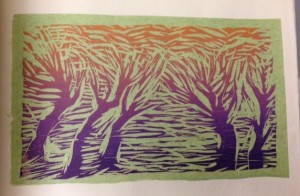