The following was written by archives intern Owen Thompson:

As part of my ongoing internship in SC&A, I recently digitized and made available in WesScholar an unusual book for Wesleyan’s Adopt a Book program. The volume, Pictures of Middletown and Wesleyan, was adopted by library staff and friends in honor of former Assistant University Archivist Valerie Gillispie when she left Wesleyan to become the University Archivist at Duke.

In order to digitize the book it was carefully opened on a copy stand with two lights and a digital camera suspended above it. The lighting and angle was adjusted as necessary to get the best image for each page. The images were then downloaded and Adobe PhotoShop was used to crop and resize them. Finally the images were combined into a pdf file using Adobe Acrobat. I spent some time gathering information about the book, including some research on the names and poems inside it. When the pdf was uploaded to WesScholar, this metadata was used to create a detailed description for the book. The origins of this book are currently unknown. Olin Library accessioned it in 1951, but we have yet to discover a record of when it was actually acquired and from whom. The latest date given in the book is for a poem that has a date attached of October 22, 1904. 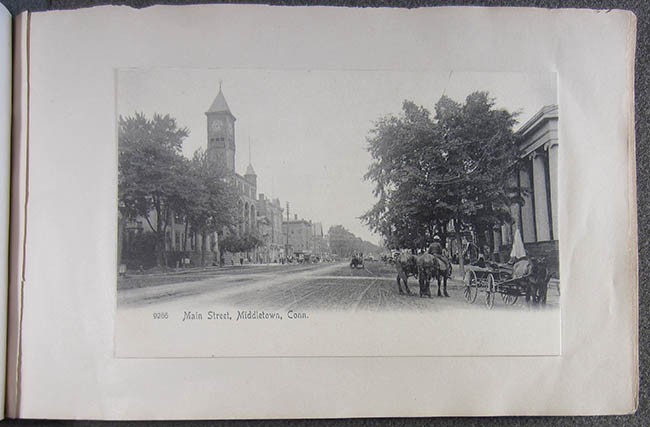 The book is something of a turn of the century scrapbook.  The cover has no title, but rather a postcard of Middletown glued to it. The book is approximately 34 pages, and roughly three-fourths of them have a postcard of Middletown or Wesleyan buildings and landmarks glued to them while most of the others are blank. About half of the facing pages have a hand-written poem or quote.  Poems by John Gardiner Calkins Brainard (“On Connecticut River”) and Wesleyan museum curator Samuel Ward Loper (“Fair Forest City”) are extensively quoted, as well as Henry Wadsworth Longfellow. Additionally, the author includes entries that appear to be from Wesleyan students, with class years spanning 1882-1902. This suggests that the author may have been a professor or administrator. 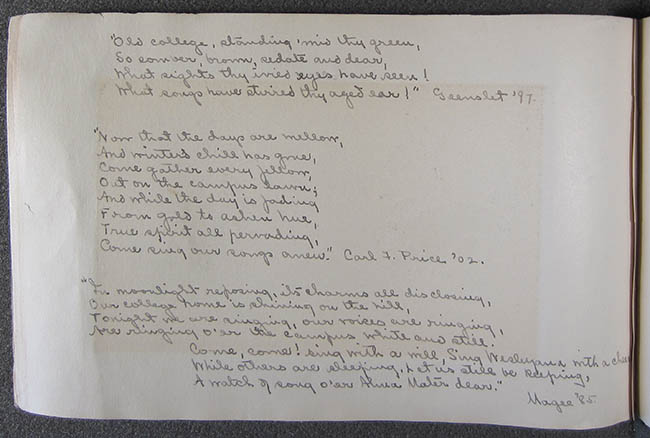 The unknown creator clearly took great care in assembling and expanding this book. Many of the quotes and poems have some relation to the image on the postcard on the page it faces. The first page says “South Main St.” on it, which may have been a placeholder for a further addition. Between each page, one or two additional pages have been cut out, apparently to make spacing for the postcards so the book would not bulge. Some of the postcards have additional details written on them, as well as numbers that may have been intended as a preliminary order. 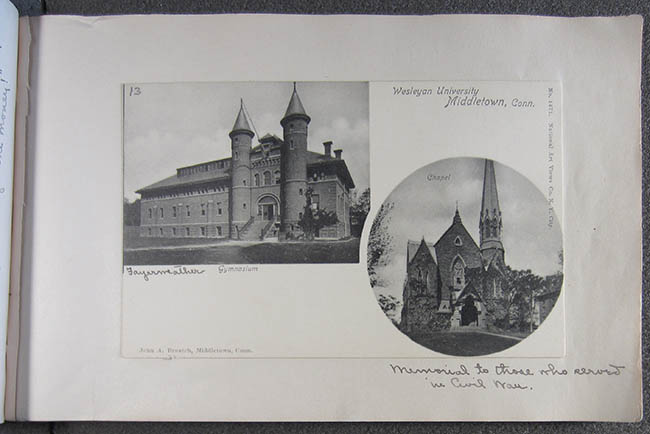