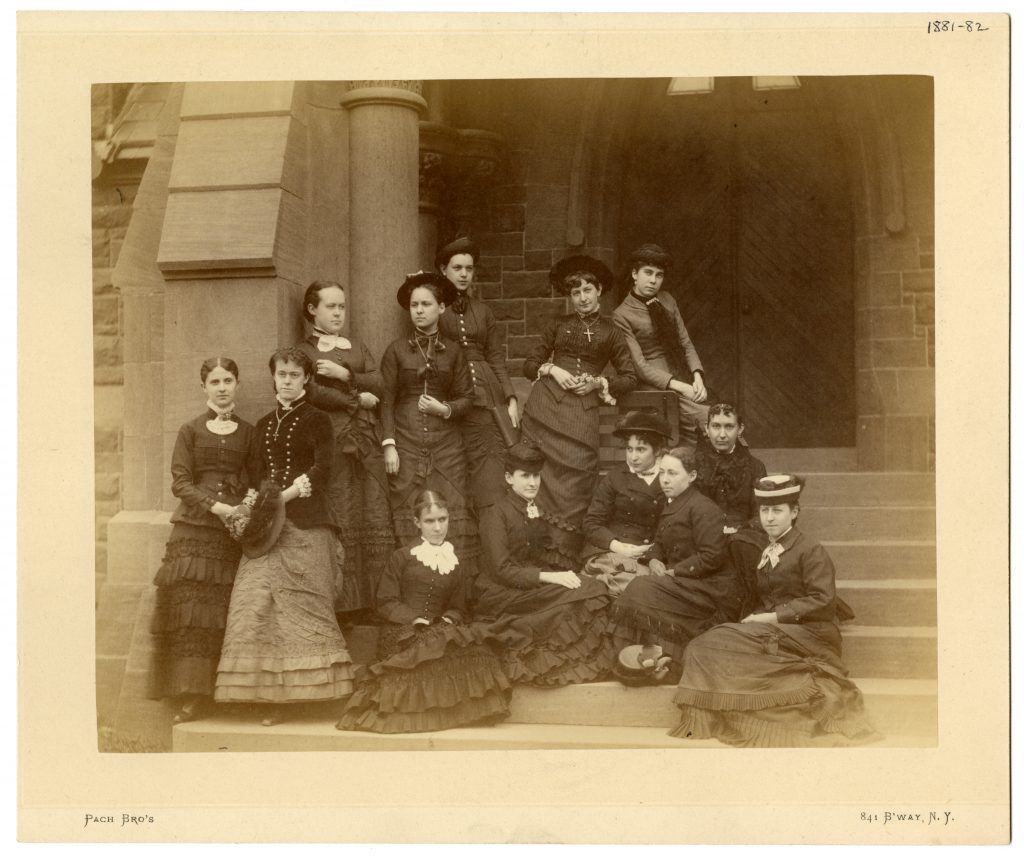 Special Collections & Archives holds a rich collection of documents and photographs related to the Wesleyan’s first period of coeducation, 1872-1912, and it has been recently digitized and is fully available online. The Coeducation Collection finding aid has been updated to provide links to the digital files. You can also browse the collection. This is not the only resource for this topic (please see this post for a description of additional resources), but it’s an excellent place to start.

Pictured above is a photograph of women students, 1881-1882. Founded as a men’s college in 1831, Wesleyan went through two phases of coeducation, the first of which lasted from 1872 to 1912, and the second from 1970 to the present. The 1872 decision to admit women resulted partly from Wesleyan’s concession, as a Methodist institution, to the well-established Methodist practice of educating men and women together. In addition, seven other New England institutions had initiated proposals to coeducate in 1871, which may have encouraged Wesleyan to do the same. These proposals, while not formally coordinated, all came in response to the women’s suffrage movement of the early 1870s.

From 1872 until 1892, women represented a small minority of the undergraduate community, and only forty-three women graduated in that period. However, female admissions increased in 1898, which led to a decrease in male admissions; this development fueled the fears of those who believed that the presence of women at Wesleyan would curtail opportunities for male students.

The shift away from coeducation was sparked by a change in the leadership of the trustees. Trustee Stephen Henry Olin led Wesleyan’s movement away from Methodism and its redefinition as a metropolitan-based university, with a heavy emphasis on athletics. This shift would align Wesleyan more closely with the values of all-male institutions such as Amherst, Williams and Yale.

From 1900 onward, the decline in Wesleyan’s overall admissions contributed to the movement against coeducation, as many feared that the college had become too “feminized.” Starting in 1900, the admission of women was capped at 20 percent, but this measure never fully reassured coeducation’s opponents. The trustees’ decision to end coeducation in 1909 with the Class of 1912 came as the culmination of a decades-long backlash against the 1872 decision.