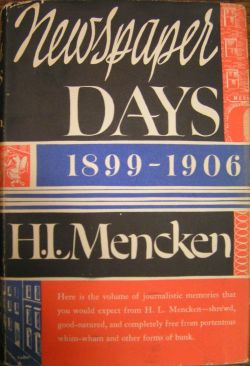 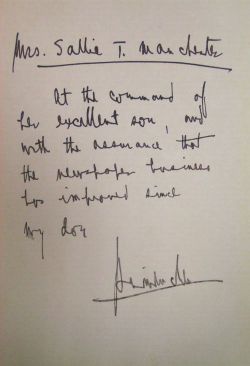 The more than 1000 books in the Manchester office in Olin Library have been inventoried. Of these, 22% are copies of books by William Manchester himself, representing a veritable United Nations of languages. American Caesar is represented in French and Spanish, but also in Japanese, Indonesian and Hebrew. His most well known book, The Death of a President appears on the shelves in Russian, Greek, German, Japanese, Dutch, Swedish, Danish, Norwegian, Romanian, Portuguese, Italian, French, Spanish, Slovenian and Finnish.

Of the remaining books, 8% are references such as dictionaries, encyclopedias, atlases and thesauri. There are, of course, many books on his last subject, Winston Churchill, and many books on 20th century history in general. Manchester traveled widely and there are travel guides to England, France and Germany. As an old Baltimore Sun reporter, he had books on the history of various publishers and newspapers. He was a Marine Corps survivor from World War II and had many books and publications relating to the sixth marine division. Books written by H.L. Mencken are well represented. Mencken was the subject of his first major published work, and was the reason that Manchester came to Baltimore and worked at Sunpapers. There are also books by Wesleyan authors, notably Joseph Reed and Paul Horgan. Nine of the Horgan books are inscribed by the author.

It is easy to tell which books Manchester used frequently; they show evidence of hard wear. Book jackets are often missing, the pages are heavily underlined and highlighted. Sometimes there is the mark of late night sessions sustained by coffee. Many books had interesting inserts and inscriptions, especially the books by Mencken. Newspaper Days is inscribed by Mencken to Manchester’s mother: “Mrs. Sallie T. Manchester – At the command of her excellent son, and with the assurance that the newspaper business has improved since my day – HL Mencken”. William Manchester was an author dedicated to his art and actively involved with the world around him. The library bears witness to the man.